Home » Blog » How to Read a CBD Lab Report: A Complete Review

How to Read a CBD Lab Report: A Complete Review 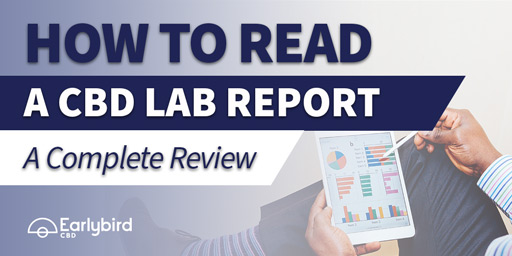 Not sure what’s in your CBD oil? The best way to find out is to learn how to read a CBD lab report. Several CBD companies have their products tested by third-party labs. But, not all these reports are easy to navigate. Some of the content on these reports can take considerable time to comprehend. Once understood, however, these CBD lab reports can give you assurance of the CBD product you’re interested in.

Two primary reasons consumers rely on lab reports is to confirm the potency levels of CBD and THC. For a hemp-derived CBD product to be compliant with federal regulations, it cannot contain more than 0.3% THC.

As for CBD levels, consumers like to know that the amount of CBD on the label is accurate. Not all CBD companies operate with integrity. But the ones that do, generally care about transparency. Paying for third-party lab testing is one way of being transparent.

The term ‘third-party lab’ refers to a laboratory that’s 100 percent independent of the company paying for testing. Independence means there’s no business affiliation or monetary incentive involved. It also means that consumers can be confident that all testing was performed in good faith.

In this article, we’ll walk you through different kinds of lab reports and provide real examples from the highly regarded CBD company, NuLeaf Naturals.

TYPES OF TESTS PERFORMED BY LABS

Not every CBD company performs a complete set of lab tests. Some only test for cannabinoid potency. Although this is an important test, it’s not the only test that matters. Other tests check for heavy metals, pesticides, terpenes, and more. We’ll talk about each of the CBD lab tests and explain how to read its corresponding lab report.

A cannabinoid profile confirms the percentage of each cannabinoid found in the tested product. Cannabinoids, such as CBD and THC, are the most talked about and studied cannabinoids. Yet, there are many others that have therapeutic benefits as well, such as, CBC, CBN, CBDV, CBDA, and CBG.

To get a deeper understanding of the cannabinoid profile, let’s look at the following example below.

In this lab report, there are a few details to look for right away. First, take note of the CBD company name and the lab who performed the testing. It’s important that these two companies are independent of one another to ensure unbiased results.

Next, look for the product name listed at the top. It’s called ‘Full Spectrum CBD oil’. Why is this important? Well, this product is a full-spectrum oil, which means it contains more than just CBD.

The cannabinoid profile can help confirm the presence of other cannabinoids. This report shows us that six other cannabinoids besides CBD were found in this oil. We see concentrations of D9-THC, CBDV, CBG, CBC, CBN, and CBDA. So far everything checks out.

Now, take a look at the percentage of THC. Remember, a CBD product must contain less than 0.3% THC to maintain its legal status. The cannabinoid profile shows the levels of D9-THC at 0.14%, which falls well within the legal limit.

Everything looks great on this report, now let’s take a look at a few other types of CBD lab tests.

In the example lab report from ProVerde Labs, you can see the letters ‘ND’ next to each of these heavy metals. The abbreviation stands for none detected. As such, NuLeaf Naturals full-spectrum CBD oil received a “Pass” for each of these four heavy metal tests.

The next section of this lab report checked for microbiological contaminants. This test looks for different kinds of harmful bacteria, molds, and yeast. Clearly, these are not things you want in your CBD product. Based on the testing, the asterisk in the ‘Limits’ column says “All recorded microbiological tests are within the established limits.” Therefore, the status says ‘PASS’ for each one of the contaminants tested.

The next lab report we’re going to look at is called “Pesticide Analysis.” Agricultural crops, especially those grown on a large scale, are at risk of pesticide exposure. To reduce the risk of buying a CBD product with unhealthy chemicals, such as pesticides, it’s important to read over this report.

This table shows the names of analytes, or chemical substances being analyzed. As you scan down the list of analytes, you’ll see that none of these chemicals were detected in the CBD oil. And the ‘Status’ column indicates that nearly all the chemicals in question received a ‘PASS’. Only two of the analytes have an asterisk in the ‘Status’ column which specifies that “no recovery was observed.”

Terpenes are organic compounds found in plants that are responsible for their aroma and flavor diversity. Like cannabinoids, terpenes found in hemp plants have a therapeutic effect on the body. They work synergistically to produce a more effective CBD formula. Each product contains different levels of terpenes depending on the extraction process. In general, it’s better to see a diverse number of terpenes in your CBD oil and at higher levels.

Like the other lab reports, this is an important one to pay attention to. Volatile organic compounds include residual and chemical solvents. And solvents have the potential to break down into carcinogens, like formaldehyde and acetaldehyde.

Carcinogens, such as those in cigarettes and are in no way, shape, or form good for you. So, it goes without saying, that you don’t want them in your CBD oil.

In this lab test, solvents such as propane, butane, acetone, and hexane, were tested for. The results of the test got reported in the ‘Amount’ column. For every compound on this report, the lab found that none of these solvents were detected.

The only compound with an exception was Ethanol. ProVerde Labs placed an asterisk next to it saying, “as many formulations contain flavorings based on ethanol extracts of natural products, no status has been assigned.” Every other solvent on this report was received a ‘PASS’.

NuLeaf Naturals Full-Spectrum CBD oil passed each one of the tests by ProVerde Labs with flying colors.

To access a copy of the lab reports used in this article, please visit the NuLeaf Naturals Lab Test Results Page.

Now that you’ve learned how to read a CBD lab report, you have enough knowledge to go out into the marketplace and find a reputable CBD brand, like NuLeaf Naturals.

Like what you’re reading? Subscribe to our Blog and/or our YouTube Channel to get the latest CBD News & Resources delivered to your inbox. Or contact us if you have any questions about CBD lab reports.